You may have notice that this blog has become a little Madge Bellamy heavy over the last month or so. So what’s with my fixation?

Well, I’m making one of Madge’s most famous costumes for a client. The costume is Madge’s ‘shroud’ from White Zombie. 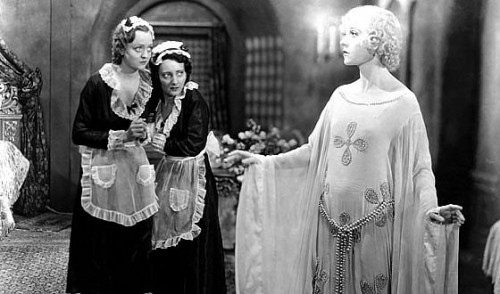 Isn’t it gorgeous? All that silk, flowing and draping!

Madge and Bella Lugosi as the zombie master

I love that it has such strong medieval inspiration. It’s the best kind of sewing: I get to do a complete pastiche of the medieval part, but it’s still perfectly historical — just to the 1920s!

I say 1920s, because even though White Zombie was filmed in 1932, I am certain that the dress was borrowed from an earlier film.

White Zombie was filmed on a shoestring budget, and we already know they re-used one dress from an early Madge Bellamy film. They also re-used sets from a bunch of other films.

After watching the movie dozens of time it’s become apparent that the ‘shroud’ is two sizes too big on Madge, and missing some pearls from around the neck, so it’s pretty obvious that it wasn’t made for her and this movie. I just need to figure out what it was made for!

The whole cast, and the dress is...pink?

So what kind of client want’s a replica of a 1920s does medieval shroud from the original zombie film?

A fabulous one of course!

The frock will actually be a costume again: I’ve been asked to make it for Elizabeth of PorcelainToy  to wear as ‘Madge’ in their upcoming music video.

I’m super excited!  I love PorcelainToy’s music, Elizabeth is going to look so amazing, the song is fabulous, the video concept is brilliant.

I’ll blog a bit more about making a 1920s does medieval costume, and then you get to look forward to seeing it in action when the video launches!

Madge does the Zombie Masters bidding