A reader asked me about 18th century Masquerade costumes.

How fun!  It’s right up my alley!  I wish I had the time and reason to make one too!

The theme allows for either full on stays, stomachers and paniered robes, or simpler flowing ‘negligee’, permissible under the guise of classical inspiration.

There are so many possibilities!

Goddesses have always been popular, and would be perfectly appropriate – one of the top masquerade destinations in 18th century London was the Pantheon.

I could do Athena, goddess of wisdom, with a medusa-head stomacher.

Or Diana, goddess of the moon and the hunt, with star and moon spangled hair, and even stags and bow and arrows (if I was feeling really over the top!)

I bet Venus was popular in the 18th century; the goddess of love could wear a rose-wreathed frock, and have a miniature cupid in her hair.

There are non-goddess options available too: Elisabeth Cudleigh, Maid of Honour to Princess Augusta of Wales, attended a masquerade ball dressed as ‘Iphigenia ready for the sacrifice.”  There aren’t exact details of the costume available, but we know that it caused an enormous scandal because at least one of Elisabeth’s breast was brazenly on show.  Contemporaneous artists imaginings portray her as wearing anything from a very brief tutu of leaves, to an outfit that is astonishingly close to La Belle Otero’s exotic dancing ensemble – just minus some of the bust, to a Grecian chiton which slips off one shoulder.

Bare bosoms aren’t quite my thing, so I’d go for something a bit more formal.  Here are some images I would use for inspiration:

I particularly like the two ladies carrying baskets of flowers.  My version would have the patterning on the skirts taken directly from a Pompeiian mural, and you would wear it with laurel wreaths, and go as Nike, the goddess of Victory.

A bigger version of the image can be found here.

Richard Samuel, Portraits in the Characters of the Muses in the Temple of Apollo

Samuel’s representation of the ‘nine living muses of Great Britain’ is an excellent example of 18th century interpretation of classical dress.  And the column even has the exact laurel swags I hanker after!

Robert Dighton, Return from a Masquerade, 1784

If this image is anything to go by, by the 1780’s chemise a la reine were  acceptable masquerade dress.  I can’t be certain, but the staff and draped neckline indicate that our sleepy party-goer might have been frolicking as a classical shepherdess. 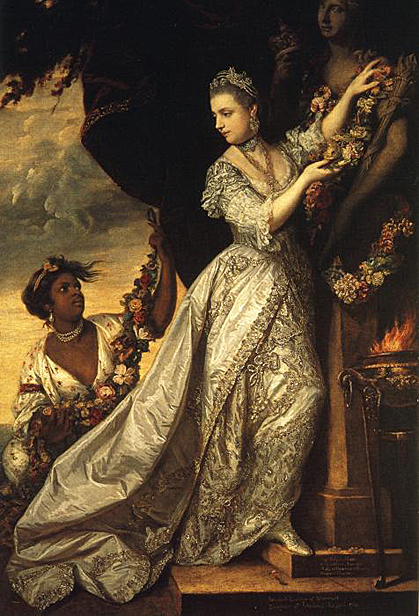 I adore this painting of Lady Elizabeth Keppel draping a garland of flowers around a bust of Hymen, the god of marriage, in anticipation of her upcoming nuptials.  According to tradition, the dress she is painted in is the dress she wore as Lady in Waiting at the coronation or marriage of Queen Charlotte.  Reynolds has given the garment a classical flavour by styling it without paniers.

Reynold’s also painted ladies in more literal takes on classical garments, such as in this 1773 painting.

Marie Antoinette and her family dancing

This painting depicts the 10 year old Marie Antoinette and her brothers dancing at the wedding of her eldest brother.  I don’t know how much dancing costumes related to masquerade costumes, but it is worth looking into.  The wings on the younger boy would certainly indicate that he was intended to represent a cupid, which may mean that the rose strewn costume of Maria Antonia (as she was known as a child) was meant to represent Venus or Love

I’ve never quite figured out what Jekaterina is supposed to be in this masquerade outfit.  A shepherdess?  Or a exotic Turkish maiden?  With her roses and classical wrap, she might have even been styled as Venus!  It certainly gives a costumer food for thought in terms of combining fantasy and actual historical garb.

Masks are, of course, de rigeur for a masquerade, and seem to have been more important than a costume, at least in the first half of the 18th century.

Mengs’ portrait of the Marquesa de Llano may be one of the most famous, and beloved, 18th century masquerade images.  Isabel is shown dressed as a maja, a sort of Spanish gypsy.  I love how the costume combines actual elements of maja dress with the necessary formality of fashionable 1770s garments.

It’s not clear if Mary Graham’s fancy dress in her famous portrait by Gainsborough actually existed or not – it’s certain that Mary did not wear it for any of the sittings, as she was too ill.  Even so, the mix of 16th century Van Dyke inspired historicism and 18th century fashion is charming.

When the lovely Jeanne is described as being ‘in Spanish Costume’ I suspect her dress was supposed to resemble 16th and early 17th century Spanish dress – the costume of Spain’s heyday.  The ruff and puffed sleeves certainly indicate that era.  Whatever the inspiration, it’s a lovely dress.  I particularly adore her shoes, and the detailing of her lace hem.  It’s a pity that Jeanne looks so bored, and even her darling spaniel can’t get her attention!

From the bits of information available to us, it seems that pretty much anything goes for 18th century masquerades, from full scale stays and panier court dress with allegorical trimmings, through informal dress, all the way to..uhhh…leaf tutus.

For more information on 18th century masquerades, check out The World Upside Down: 18th Century Masquerades.