It’s been a while since I did a proper ‘Textiles on Thursday’ with something from my collection, but I’m trying to go back to that.

This week I have a piece of real kiwiana, but also something that people all over the world may recognise with nostalgia: a throw of crocheted wool granny squares.

My throw consists of 24 large granny squares: 6 one way, 4 the other, in shades of aqua, forest green, grey, lavender, periwinkle, heathered gold, yellow gold, white, ocean blue, brick red, pale blue, royal blue, peach, magenta, grape, cream and black.  Lots of colours!  The throw is lined in three cotton flour sacks which have been machine sewn together, and machine sewn to the crocheted throw around the edges. 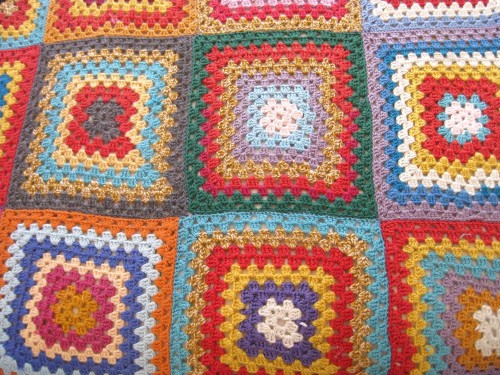 Most of you will recognise granny squares from the 1970s, but the technique dates back to at least the 19th century.  Weldon and Company published a crochet  pattern for what they call ‘patchwork squares’ in 1895, and extolled the ease with which they could be made, and how frugal they were.

Felicity models the throw, because everything looks better with a cat

Their frugality based on the way they used up spare bits of wool, made granny squares popular during the Depression, and in the war years afterwards, when yarn and other textiles were rationed.

I believe my throw dates to the end of this period, probably the mid 1950s, possibly as late as the mid 1960s.  This is based on two things: the yarns used, and the flour sack lining.

The yarns used in the throw are all pure wool: highly unusual for a 1970s quilt, even in New Zealand where wool has always been predominant over synthetics.

Felicity sniffs the throw. Do the yarns smell old to her?

The colours used are also consistent with 1950s knitting advertisements in New Zealand.  Even the orange shades, which we think of as typical of the 1970s, frequently appear in ’50s designs.

Interestingly, some of the yarns have perished and faded more than others.  The pale aqua blue, for example, is very weak.  I wonder if the dye has actually weakened the fibres?  Unfortunately, there is a lot of this yarn in the throw.

The other evidence for my date is the flour sacks that the throw is lined with.

When I first got the throw the flour sacks were so old and worn and torn and stained that I didn’t realise what they were, though the piecing should have given me a clue.

It was only when I started to unpick them, with the thought of re-lining the throw, that I saw the printing on the back and realised their significance.

This flour bag was possibly from Atlas Flour Mills in Timaru, South Canterbury

New Zealand switched to the metric system in 1967, so the ’50 lbs’ on the second bag definitely dates them to before that date.  Atlas Flour and DH Brown & Son were both established in the 19th century, but I haven’t been able to determine when they ceased trading.  The last mention I have of the former is 1943.  DH Brown seems to have been going strong until at least 1964.

An advertisement for DH Brown & Son 'Peerless' Flour, circa 1900

In addition to the wear to the flour sacks, there is distinct fading to the wool yarns, which is visible when you compare the vivid colours of the protected reverse of the throw to the exposed front.

The one thing that makes me question my dating is the heathered, or marled, gold and cream yarn.  This is a colour I think of as very 1970s in comparison to the other colours. There is a possibility that the throw was made in the early 70s from materials that were primarily stashed over a decade earlier, but the bulk of the yarns and textiles date to the 50s.

Whatever the actual date, I just love the aesthetic and philosophy behind the throw.  I love the vivid hodge-podge of colours: the idea that if you throw enough things together, it will work.  It’s so comfortable and unique and homey and organic.  Everything that modern, synthetic, mass produced items aren’t.

Mmmmy...I just want to snuggle up in the throw and play with Fissy!

I also love thinking of the woman who made this throw (and yes, it was almost certainly a woman).  The love and work that she put into this quilt.  The effort & skill of making something beautiful and useful, something that gave warmth and comfort, out of the last ends of balls of yarn, and three spare flour sacks.

The throw embodies all that is good and noble about crafts: a unique aesthetic, a personal touch, a clear, useful purpose, and a respect for the materials used, and the environment that produced them.

This throw was in my collection for a while, but has moved on to another home.  Much as I love them, there are only so many pretty textiles I can own, and this one was quite bulky.  I hope its new owner love it as much as I do, and is as inspired by it.