Last week so many of you loved the unusually cut and coloured 1750s robe a la anglaise that it rated a 9 out of 10.

Some interesting questions were raised about the dress.  Was it displayed on a too-small mannequin?  Was intended to be a pregnancy frock that adapted with the size of the wearer?  Was it made by an amateur dressmaker who couldn’t make it symmetrical?

This week won’t raise any of that sort of questions, because we know a lot about the dress in question.  Remember the party that the Smith’s house in Meet Me In St Louis?

Judy Garland, as the teenage Esther, attempts to romance the neighbor boy while wearing a memorable tassel trimmed ensemble, which may or may not have been blue and yellow, depending on how much you believe the colourist.

UPDATE: Now with a video clip, so you can see the context and rate the dress in motion.  Apologies for the dreadfully un-PC song! 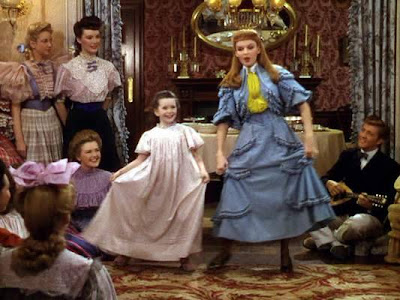